Posted on 15 December 2015 by Richard Nissen

In September 2015 I was asked to give a workshop at the Annual Conference of Dowsers on Animal Navigation.

Of course I talked about how animals, including birds, navigate and all the outstanding questions that remain on how they do it.

Those who came to my presentation were some of the best dowsers in the UK. I chose to use my presentation to see if these dowsers could use their dowsing skills to answer these outstanding questions on animal navigation.

Please note that map dowsing is a technique used by dowsers who use a map to focus their minds on something that they are looking for. All water diviners use map dowsing to find the general location of a water source so that when they arrive on site they can go directly to the right place and mark the exact place to drill.

My idea was to use these skills to see if these dowsers could find the routes of fledgling cuckoos. We cannot track fledglings using modern GPS or any other tracking devices attached to the fledglings as they are too young and not strong enough to carry the trackers.

Dowsers have the idea that all living animals, including humans, leave dowsable trails behind them. So dowsers can find paths or routes that have been travelled and embedded by many generations of travellers. A good dowser can follow a track just by feeling the way. You can track sheep walks in with no problems in zero visibility. So this piece of work was to see if good dowsers could find and follow cuckoo tracks.

The answer was they could and they did find and follow the tracks of cuckoos. Of the 17 participating all but one was able to do this work. Of the 16 who participated, and agreed they could tune into cuckoo flyways, all ended up in the Congo. It was never explained that this is the cuckoo wintering ground. All the tracks make sense. One person identified that the cuckoo he was tracking had died in the atlas mountains of Morocco. One person had their cuckoo coming down via the south of France and out over the Mediterranean Sea to the Congo and back up the west coast of Africa. All the routes dowsed match BTO adult tracked birds.

Of the 17 participants 15 said they had a sense of direction and used it and two did not.

I received 17 papers back from the participants

The document I used is reproduced below.

Use map dowsing to track the migration routes of the Cuckoo (starting in Britain), you may only find one 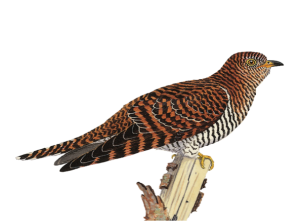 Mark the map with your route.   I suggest that you think yourself into the mind of a fledgling cuckoo trying to find its wintering grounds. Start in England and trace the route that you pick up to the Cuckoos wintering grounds in Africa

Please note that there are several routes so there is no right answer. There seem to be stopping points and turning points so if you find some mark them

Below is the map that the dowsers were asked to use.

The picture of the cuckoo is to help the dowsers focus on what they were tracking fledgling cuckoos!

The map they used is shown below> 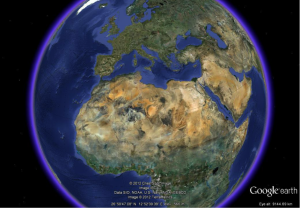 All these routes seem to be viable to me 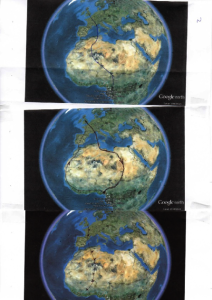 After looking for the cuckoo routes, they were asked if their Sense of Direction could take them home. By this I mean that they had confidence in the direction they should start off in from where they were in the conference centre in Leicester.

Migration for animals has a high redundancy and a lot get killed or die on route. But typically clutches are say 6 so you can afford to loose a few. Hwever, this sort of score given by my dowsers gives me confidence that if we take away our modern navigation aids we can find our way. Obviously more work needs to be done but this does give an explanation of how animals might navigate.

You do not need to be too accurate when you set out but you must be accurate enough to get near enough your home to recognise landmarks so that you can orientate your self for the last bit. See much work on Hippocampus based navigation on the web site.

These dowsers were able to tune into the cuckoos and dowse a route which correlates very well with the BTO studies of adult cuckoos. I did not tell them where the cuckoos winter!

See the links on www.animalnav.org

As we do not understand how dowsing works perhaps we should be more open minded about how animals navigate and investigate these phenomena.

This entry was posted in Animal Migration, Bird Navigation, Dowsing, Sense of Direction. Bookmark the permalink.