Posted on 2 November 2011 by Richard Nissen

The northern elephant seal, somewhat smaller than its southern relative, ranges over the Pacific coast of the U.S., Canada and Mexico. The most northerly breeding location on the Pacific Coast is at Race Rocks, at the southern tip of Vancouver Island in the Strait of Juan de Fuca.

The southern elephant seal is found in the Southern Hemisphere on islands such as South Georgia, Macquarie Island, and on the coasts of New Zealand, South Africa, and Argentina in the Peninsula Valdés, which is the fourth largest elephant seal colony in the world. 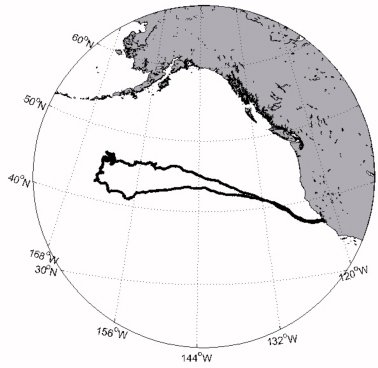 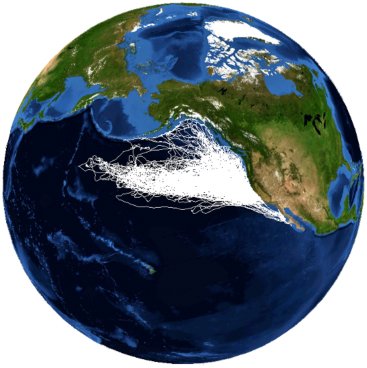 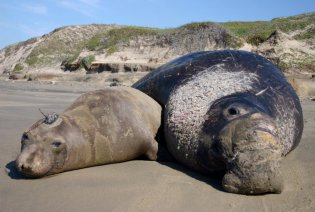 Adult female and male northern elephant seals.  The female is instrumented with a satellite tag on her head and a time-depth recorder on her back.  These tools allow us to track movement in both the horizontal and vertical domain.

Elephant seals have a nomadic lifestyle. Travelling between colonies and foraging out in the Pacific Ocean, northern elephant seals eventually return to their home colony. But how do they relocate home after a journey? Curious to find how northern elephant seals navigate to find their way home, an international team of researchers based in Japan, California and Scotland led by Moe Matsumura attached accelerometers, depth gauges, GPS trackers and VHF transmitters to three juvenile elephant seals. Releasing the animals in the Pacific Ocean 60 km from their colony, the team tracked the elephant seals’ return journeys to try to identify which strategies the animals use (p. 629).

Retrieving the trackers when the youngsters returned to shore, the team analysed the seals’ GPS diving profiles and saw that they had headed toward land before reaching the coast and following it back to the colony. When submerged the seals swam in almost perfectly straight lines, despite indulging in potentially disorienting drift dives, when they spiral upside down as they descend. However, the seals do not appear to become confused and the team suspects that the animals rely on either acoustic or geomagnetic cues to help them maintain their bearing.

Back at the surface, instead of swimming in straight lines the seals switched direction by anything up to 360 deg. Matsumura and her colleagues suspect that the seals use visual landmarks to guide their choice of bearing above the surface. So elephant seals appear to use several strategies when navigating to help them relocate the colony when they have strayed from home.

This entry was posted in Animal Migration, Elephant seals. Bookmark the permalink.