You can see the tern’s tracks from their breeding grounds in Greenland in the Arctic (in yellow) to their wintering grounds in Antarctica. The white track is the averaged return flight.

The terns dawdle down to their Antarctic wintering grounds looking for food etc. 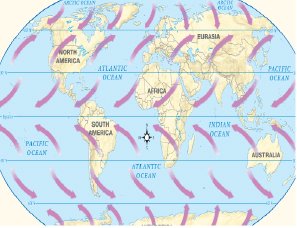 Note: the westerlies blowing at the higher lattitudes and the trade winds blowing towards the equator where the doldrums lie, becalming many sailing ships in the past.

You can see the two strategies terns adopt on their journey south.

Strategy 1
Fly against the winds but get food on the way. This is the journey down the African coast route.

Strategy 2
Fly with the prevailing winds but with less food on the way, which means getting down to Africa and letting the trade winds sweep you across the atlantic and then hug the South American Coast until the westerlies push you across the southern Atlantic to your wintering grounds in Antarctica.

The Home route to breed
Arctic Terns, like many other animals, decide to go “home” to breed and set off in the best most direct line, no loitering this time.

I am certain that they fly due north but let the winds take them where this works for them. This is like swimming across a river whilst heading directly for the other bank, you let the stream take you down the river. This gives you the least swimming distance but to get to your destination you can then either swim up the river near the bank where the current is least or walk along the bank.

You also see the Coreolis effect  http://en.wikipedia.org/wiki/Coriolis_effect which has exactly what drives the prevailing winds but also the flying tern as it flies to the right (east) as it goes north and then flicking westwards after crossing the the doldrums at the equator.

This behaviour is not the same as other long distance migrants over the sea, such as the bar tailed Godwit that heads straight and makes adjustments for drift as it flies from Alaska to the North Island of New Zealand. However, for the  arctic tern the target diminishes as they reach the poles, so that flying due north and south really works, but for the Godwit the navigational problem of hitting New Zealand is very diiferent as accuracy has to be perfect.