Posted on 3 January 2012 by Richard Nissen

Below is the of the swallow migration map: 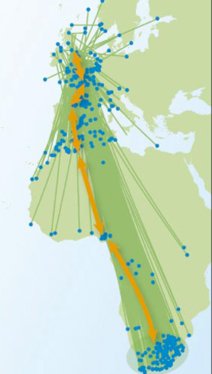 We, in Europe, measure the beginning of Spring by the arrival of the swallows.  Many swallows make a 6,000 mile journey from Europe to winter in South Africa and back.

I believe, that the way that swallows make this migration is by using imprinting.  Imprinting in this context means that every time animals (including humans) cover the same route they imprint a tiny piece of consciousness on the Universal Information field.  See Dowsing/Quantum Cosmos and How does Dowsing works.

Let me explain: the forefathers of the swallows of today discovered the routes and migration strategy used by their decedents today.  The original navigators laid down a trail that was reinforced by subsequent generations.  Each generation made the imprint greater.

Dowsers know all about imprinting as you can dowse a church for instance and you will be able to mark out the paths of the faithful from their pews and the paths to the church are all imprinted and can be dowsed.  I have dowsed sheep runs, which are made by generations of sheep and you can follow them perfectly with your eyes closed.

So all the swallows, and many other migratory species need to do is tune into the imprint and follow it.  A dowser like me feels a benign headache on the line and it goes when you deviate from it.  This makes following a route easy.  I suggest that the individuals who are not able to tap into this information do not survive.

In one of the BBC Attenborough programmes you see a young elephant disorientated by a dust storm processing back down the route that they had come to his certain death but following the line.

Of course, you will note that the imprinted route makes use of the land bridges across the Mediterranean at Gibraltar, but also the Italy and Sicily route and the route at eastern end of the Mediterranean.

In the Autumn in Britain you see the flocks of swallows gathering on telephone wires and then you see practice flights in these flocks. I think we are seeing the older birds teach that year’s fledglings how to make the great migration, all of this is to maximise the numbers who live to finish the journey.  Perhaps they are taught to feel for the imprinted routes too. I also think that this is a training ground and testing time to choose the best navigators to lead the flock.

At the RIN 08 animal navigation conference, Edward Codling presented a paper called “When many wrongs DO make a right: the navigational benefits of moving as a group”. He proved that having many individuals navigating in difficult environments make flocks navigate better than any one individual can do by themselves.  Hence, flocks are not just about flight efficiency, especially as swallows always fly near the surface not at hundreds of feet as other migratory species do.

Rupert Sheldrake in his book ‘Dogs that know when their owners are coming home and other unexplained powers of animals’ covers this well in his appendix 6: Morphic Fields.  He uses the idea of a Morphic Field when I use the word imprinting.

Jim Lyons is investigating the mechanisms whereby this might take place.  He calls this psi-lines.  We will be publishing his ideas soon.

This entry was posted in Bird Navigation, Swallows. Bookmark the permalink.