Traditional Shepherding and Transumance in the Cevennes

Posted on 2 October 2014 by Richard Nissen

Transumance  is the seasonal movement of animals from the lowlands to high pastures for the summer months.

This article and images come from witnessing Transumance in the Cevennes each year and talking to Annie Lashermes whose flock it is. The tradition of Transumance goes back millennia. 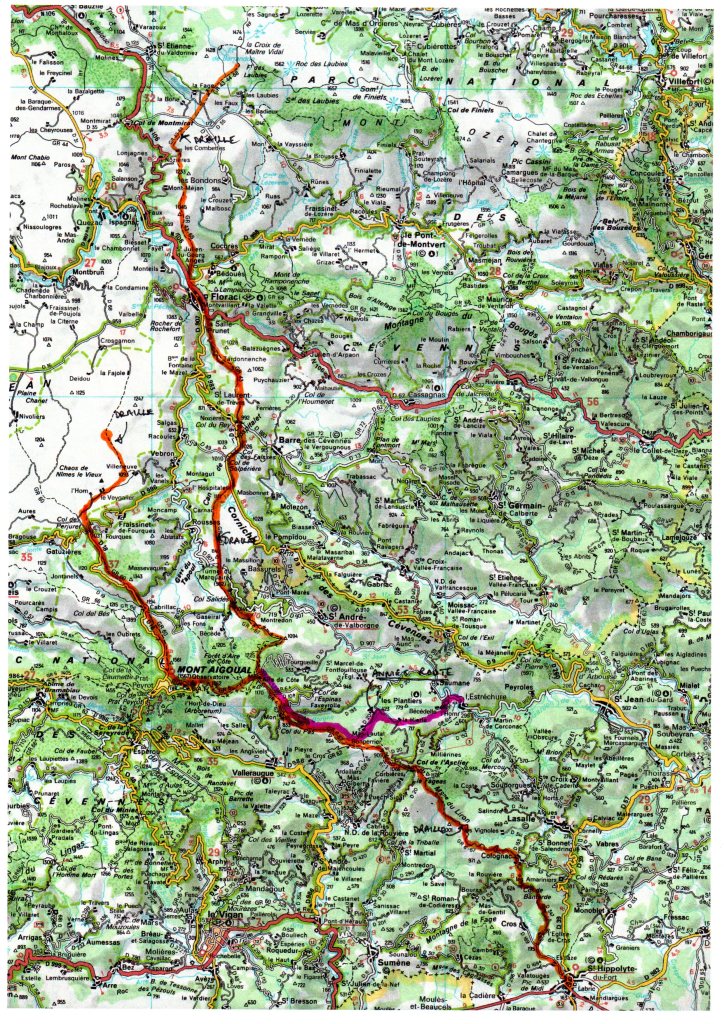 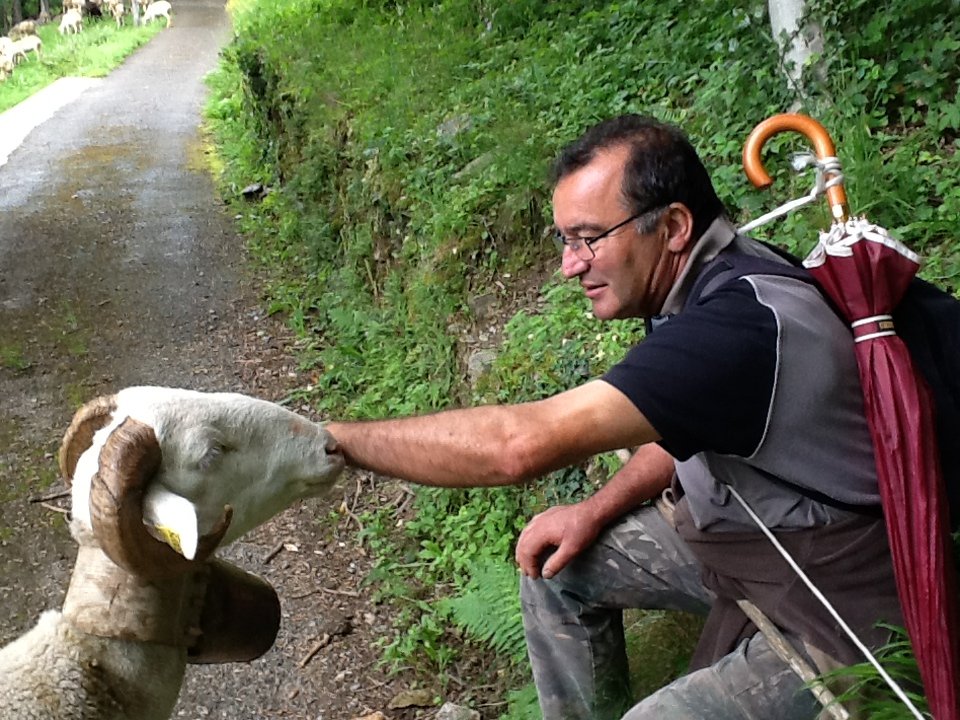 The leading ewes, who are seen by the shepherd as the most responsible and have made the Transumance journeys before, are marked with pom-poms and are the leaders of the flock on journey 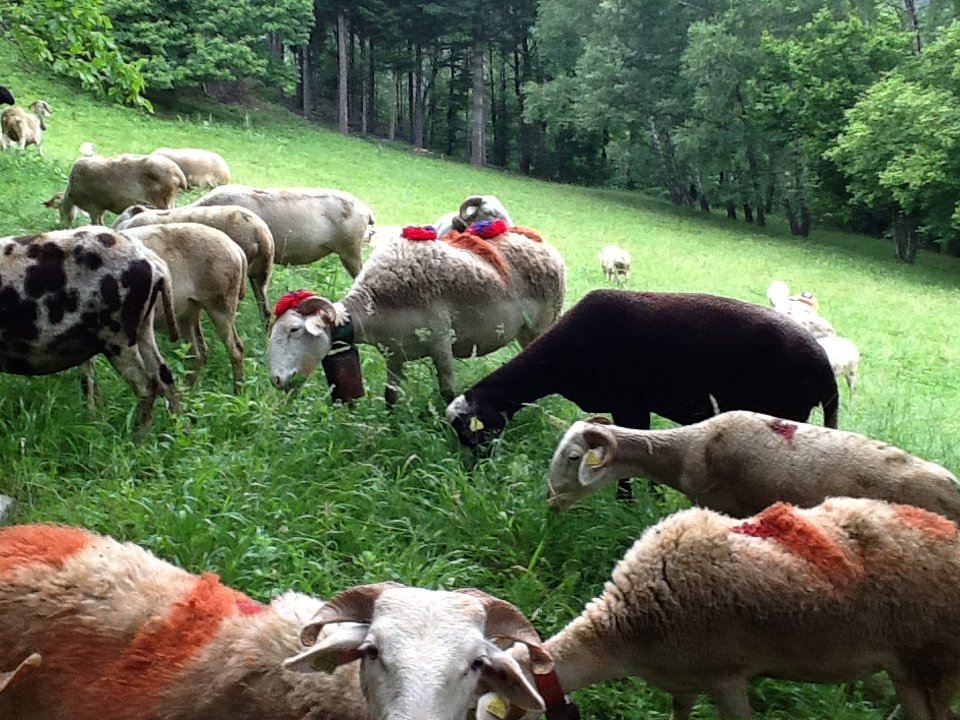 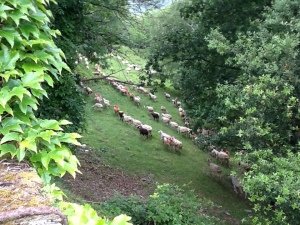 I often visit a community in the Cevennes, which is in the South of the Massif Central in France. This is a little village called Saumane near St Jean du Gard,

The Cevennes is a very mountainous in that it has steep hills that are covered in snow in the winter but these are not rocky or barren and wherever possible the people have terraced the ground or hacked out small fields as they can.

Annie Lashermes inherited a large flock of sheep from her father and has over 200 sheep now.

She is a traditional shepherdess and tends her flocks by deciding on where they should eat each day and then goes off with her flock to that location. She or a friend is always with the flock. There are no stock proof enclosed fields in this region.

The flock sticks together, Annie stands with her stick besides the flock overseeing the sheep with her dogs beside her

She told me that she decides where the sheep are to go and they seem to know where she has chosen. She does not use her dogs as the British do: to chivvy and corral the sheep.

Annie looks over her flock and if a few ewes ere from their patch, which Annie has somehow willed out, she whistles and the erring sheep know exactly that they have overstepped the boundary and scuttle back to the main body of the flock.

Once, I was talking to her and she said we are just going to move to the next pasture on the other side of the road, nearby, and as she said that the first sheep moved over the road into exactly the place she had intended.

Sometimes Annie finds some sheep seem to have ignored the flock and she sends the dog off to “sort it out”. She talks so quietly I am certain that dog cannot hear her but her dog picks up a telepathic message and sets off. When I have seen her work her dog often the dog just approaches the errant sheep and glares at them. They immediately take fright and run back to join the others.

It is uncanny as Annie’s grazing areas are not bounded by anything more than her will. She grazes areas that are a portion of an open field sometimes half of which she does not have permission to use, yet this is not a problem.

As the weather changes she participates in what is called the Transhumance. This is the journey up from her village Saumane (300 metre altitude) where she and her flock live to the high pastures around Mont Aigoual (1567 metres altitude). Her flock join with thousands of other sheep of other flocks to take advantage of the pasturage at these higher elevations.

In order to do this journey they follow ancient Neolithic trails (the Draille). The Draille like all the ancient Palaeolithic tracks goes dead straight up and down the mountains just below the ridge line (so as not to be seen) on the lee side to the prevailing wind (for shelter). There are traditional stopping points on way.

The sheep that Annie thinks of as leaders, are decorated with coloured wool Pom Poms on their backs. The sheep go up at the end of May and come back down in September.

Annie tells me that the sheep know these ancient routes and follow them. She says that they somehow “feel” the track and keep on it. Another demonstration of this sort of behaviour are what is know as hefted sheep in the Uk. These flocks know their areas and live in them. The especially prevalent in the Lake District in the UK.

There is a bond between Annie and her sheep and the sheep know the ancient route of the transumance too.

This entry was posted in Animal Migration, How animals navigate, Sense of Direction. Bookmark the permalink.